Dirty Deal Boxed Them In

Dirty Deal Boxed Them In

By seeking to “compromise” your Second Amendment rights at the Capitol in Atlanta, the establishment gun lobby has boxed themselves in.

With just four legislative days left in this General Assembly, they’ve put your gun rights up for “negotiation,” and the gun-grabbers have the upper hand.

Instead, they came back with another bill (HB 292), one that’s even weaker and more watered-down, hoping Deal would let them to have leftover crumbs.

What’s worse, State Capitol insiders tell me the crumbs could get even fewer over the next few days.

The establishment gun lobby has shown a willingness to give in to the demands of the anti-gunners.

I can assure you that we here at Georgia Gun Owners will NEVER put you or your Second Amendment rights in this position.  We will never “compromise” with gun-grabbers.

Of course the establishment gun lobby “compromising” with them isn’t good enough for the gun-grabbers, they will oppose anything with the word “gun” or “firearm” in it.

So they aren’t even attacking Nathan Deal, they’re simply asking him to do what he did last year — veto it.

Here’s an ad they are running right now, thanking him for his veto last year and encouraging him to do it again. 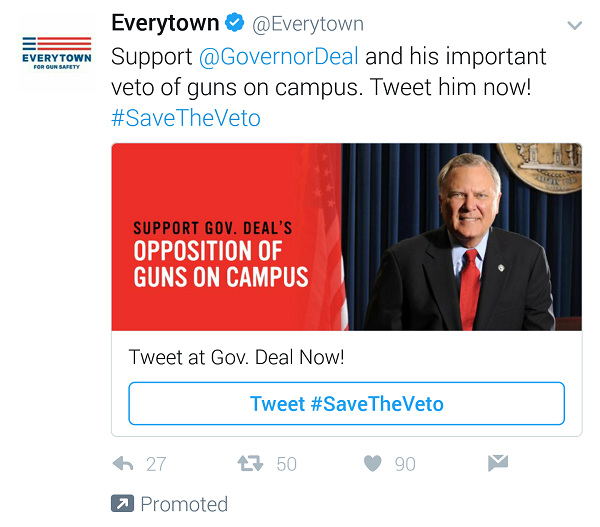 Patrick, we have long known that Nathan Deal is no friend of Second Amendment rights.

Him signing an omnibus bill four years back was simply a political move designed to get support for his re-election.

For years now, he’s worked behind the scenes to weaken, water down, and kill legislation like “Constitutional Carry” and in last year’s case, a weak “campus carry” bill.

We will not get good Second Amendment policy in Georgia by compromising.

We won’t get it by giving something up in exchange for something else.

The only way we will get our rights back is by digging in, refusing to compromise, and pushing for votes on clean legislation.

That way we will see who is really for our rights, and who is against them.

The establishment gun lobby has led many Second Amendment supporters down an ominous path toward “compromise”, a path that provides political cover for politicians, and just maybe leaves you with a few crumbs leftover.

Please check your email frequently over the next week or so.

I will keep you updated on all the latest developments from the Capitol in Atlanta — please be prepared to take action when called upon.

As always, thank you for your activism and support.

To renew your 2017 membership in Georgia Gun Owners or join for the first time,please click here.

To find out more about Georgia Gun Owners, please check out our website: