Congratulations are in order to Second Amendment supporters in Missouri . . .

On January 1, 2017, their state will become the 11th “Constitutional Carry” state in the country.

No longer will they be forced to pay a tax to the government or ask their permission (like we have to in Georgia) to exercise their Second Amendment rights.

Last week, because of relentless grassroots activism, their pressure forced the members of the state legislature to override the Governor’s veto of “Constitutional Carry” legislation.

On a personal note, I was fortunate to serve as a special advisor to the Missouri Firearms Coalition, who was the driving force behind getting “Constitutional Carry” legislation introduced, written and passed, then pushed back against the Governor, and overrode his veto.

Patrick, all of us here in Georgia should be jealous of the freedoms Missourians have just taken back from their government.

When the governor of Missouri vetoed the bill, their legislators fought back.  You may remember in our state, when Governor Deal vetoed a gun bill, our legislators rolled over and played dead.

As you know, I’m rare to heap praise on any politician.  But I can tell you from first-hand experience, legislators in Missouri wanted to fight for their rights, whereas our legislators whimper in the corner when intimidated by gun-grabbers (Nathan Deal).

That’s why it’s vital Second Amendment supporters in our state make crystal clear to our State Representatives and Senators – if you don’t take action to restore our rights, your seat could be on the chopping block in the next election.

As we look forward to the next meeting of the Georgia General Assembly in 2017, there’s no time to rest.

Right now, we have nearly 100,000 signed petitions here in the office in favor of “Constitutional Carry” to deliver at the Capitol.  But we need far more if we’re going to take our rights back.

Please click here or on the picture below to sign your Petition to Pass Constitutional Carry in Georgia.

After you’ve done that, please forward this email to your friends, family, coworkers, and anyone else who you think supports this effort.  Ask them to sign as well. 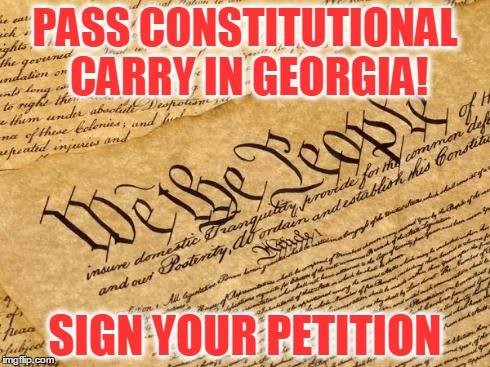 I can’t thank you enough for your activism in defense of our rights.

But we’ve got to keep pushing.  The fight simply never stops.

I look forward to the day we take our rights back in this state as I’m sure you do as well.

Did you hear what she said?